Sharing the Road With Cyclists

In 2017 Vancouver became North America’s first city with 10% of commuters reaching their destination by bicycle.  Having more and more people choosing a two-wheeled method of transportation, inevitability means adding kilometers of cycling infrastructure.  Whether it’s new bike lanes proposed on the Cambie Street Bridge in Vancouver or added along McKee Road in Abbotsford, sharing the road with cyclists is an ever-growing occurrence.

With a spotlight on sharing the road with cyclists, we’ll explain some things to remember when accommodating this popular and environmentally friendly mode of transportation.

Rules of the Road

Cyclists must follow the same road rules as motorists under the Motor Vehicle Act. This also means cyclists have the same rights and responsibilities as drivers, while on the same roads.

Sharing the road with cyclists is an important aspect of safe driving. Many of the rules of the road that you learn and build on when learning to drive are relevant when dealing with cyclists; observation, communication, and defensive driving skills are all required - especially in urban environments where stress can be elevated and space can be reduced.

The speed at which motorists drive may contribute to problems on BC roads, whether they involve a cyclist or not. When cyclists are present, caution should be used to drive at a safe speed. Cyclists do not have a brake light to warn you when they are slowing or stopping.  Always keep a safe distance to ensure your vehicle will stop in time, if necessary. This also allows you to interpret the hand signals of cyclists at a safe speed to adjust driving behaviour.

Your responsibility as a motorist dictates that you know what’s around your vehicle at all times. Having full knowledge of your position on the road and in your lane is part in parcel to being a good driver, but also gives cyclists the confidence to coexist in close quarters.

Drivers should always check their mirrors and blindspots prior to turning or making lane changes and maintain a safe following distance and space margin from cyclists; at least 1 meter on each side of your vehicle. When possible give cyclists more room via lane changes or adjust lane position if it’s safe to do so. Giving yourself and cyclists room means you have time to react, should you need to take evasive action or brake to avoid an accident. It also allows the cyclist to feel less crowded and provides room for the cyclists should they need to veer to avoid obstacles such as debris and potholes.

Drivers must recognize and interpret hand signals used by cyclists. It’s critical that motorists know the meanings of hand signals so they can share the road with cyclists.

Always ensure to make eye contact with cyclists near your vehicle. Many cyclists use eye contact as a method of communication, and that needs to be reciprocated from drivers as a way to anticipate each other's next move on the road.

Avoid honking your horn unless you’re trying to deliver a warning. Loud and abrupt honking may startle or scare a cyclist in a busy area, prompting them to misjudge a scenario that could lead to an accident or injury. 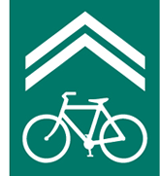 Bike lanes are marked and are lanes reserved for cyclists.  Do not drive in bike lanes unless they are marked as shared bike lanes with 2 chevrons painted above a bicycle.

Do not drive in “bike only lanes” and always yield to cyclists when crossing bike lanes to access driveways or parking spaces.

Extending common courtesy ensures everyone using the road is seen, heard, and respected. Treat others how you would want to be treated when navigating roadways and sharing space with cyclists.

Cyclists encounter situations and settings that motorists may not have to deal with in the same fashion. For example, a cyclist may need to contend with debris and obstacles on the road in a more engaged fashion than a motorist. A pothole or a rock means a cyclist may need to alter their course, and that means motorists need to extend common courtesy as the cyclist may require more space or a reduced speed from other road users.

Common courtesy also means having patience and being calm when coming into a situation where motorists and cyclists need to coexist. Cyclists have every right to be on the road as a motorist, and this respect can directly translate into amplified communication and better driving behaviours for all.

Sharing the road with cyclists is something drivers will inevitably face in their travels, and motorists accommodate fellow road-users. Extending common courtesy to cyclists, as well as knowing the rules of the road and hand signals can mean all the difference in creating a safe and confidence-inspiring space for all.